TESTIMONIALS  from past Work and Travel students

With my friend we came to the island at 2015 summer, and so far it was the best summer. What made it so special? Of course people. Working with Pat at Caddy Shack was really great experience. I was selling ice cream so I met a lot of great new people who were interested in my accent (ha ha). Working with Pat wasn’t too difficult, she was great

boss. She was flexible with working schedule so me and my friend were able to have the same days off and do some fun stuff together, like going to the main island or just chilling at the beach. Living in the Island was super chill.

You just take a bicycle and go around the island just in an hour. Island not full of fancy shops and restaurants but its full of true, sincere people who will become friends for your life.

Just like all other student, I decided to go to America, so I joined work and travel student program (WAT). At first, I had job in Boston. I was going to w

ork in Boston.  But, when I reached at New York city I found out that my job was canceled because of some reason I did not know (lucky me).  A guy from agency told me not to worry because as a part of WAT program regulations they had to give me a job so he promised that he would give me better job in 2 days. Next morning, he called me to say he had a great job in Kelleys Island. He said people are in Kelleys Island.

When I reached at Kelleys Island I met Pat Ahner and her father Danny Ahner. They were both mean well to me all the time. Since I could not speak English. They were always supportive to encourage me to speak in English as a result I did learn a lot from them. Just like the guy from agency said they are awesome. I could not find any word to describe them.

I have only best memories about working with Pat. She taught me how to be an “owner“ of the shop. She showed me tricks how to talk with customers, how to sell. At first I was shy, because I have never done anything like this before. But her feedback helped me to be more confident about myself. Moreover, I was able to see her as the business owner, to see how she is running her own business, communicates with employees, solves everyday problems. I think it’s not often when you can be close to the boss. To conclude, I am glad that I have worked with her because she started me shaping as a young worker and gave me valuable lessons which I am using today at my current workplace.

Kelleys is the island out of books with its own history and unique atmosphere, friendly community and beautiful nature. I’ve always wanted to go to a place like that. 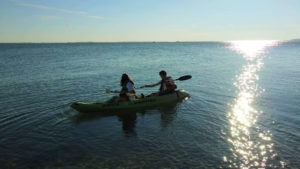 It felt so good after living a non-stop life in a big city, everything is so green, the air is great. You can go swimming, kayaking, jet skiing, paddle boarding, hiking, biking around the island, running or working out, eating out at local restaurants or seeing band performances. Also riding on golf carts was so fun, I’ve never rode on one before coming to the island. I still miss having bonfires with friends. If you like hiking there are trails for that. I was amazed by the nature, glaciers, quarry, wild animals close by. 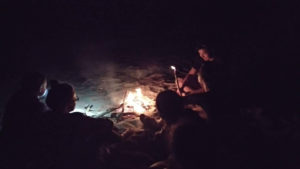 I’m so glad I had a chance to get to know locals and their way of living life, and honestly, I felt relaxed and even though it’s a work program, I felt like I was on holidays.

There’s also an international dinner organized by locals, just go there and meet the nicest people and try the food they made.

I want to say a big thank to my employer Pat because working with her was a blast and to local community as well, because they all made us feel like home. Kelleys Island is forever in my heart.

What you can read next